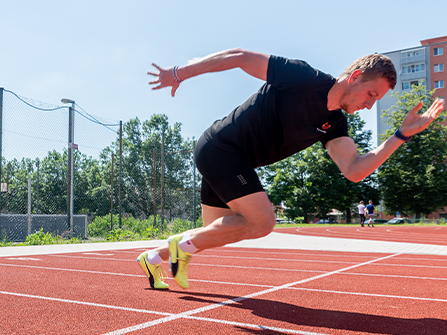 Hi Jan, we're glad you found time for us. How did you get to work with PPS and how did our Athletics Mania, of which you are a part, appeal to you?

Hi, I'm looking forward to it too. Through my coach Naďka, who went to primary and secondary school with PPS CEO Ivan Krechňák. We have been talking for a long time about wanting to create an athletic game and for me, it was a matter of certainty to support such a project I think it also has a lot of advantages for me personally and I am looking forward to such an athletic project.

What games do you play and which one is your favorite from PPS?

From PPS I also had the opportunity to play Biathlon Mania, Tennis Mania, and Ski Jump Mania. The best was probably Ski Jump Mania, it caught me the most. So, of course, I'm already looking forward to Athletics Mania. And when we're talking about games, we usually play an NHL on the PlayStation. When I'm alone, I have a Horizon Zero Dawn or a race like Gran Turismo. I can say that I am - not addicted - but I like games (smile).

How do you maintain a work-life balance?

In my opinion, it is mainly about the people I have around me, who understand me and help me to have the right setting, and a good balance between school, athletics, and other matters. People are the ones who complete you, the ones around you but also the fans.

Do you have any guilty pleasure?

It's hard to say if it's so catastrophic, but I like - not eating unhealthily - but sometimes I like a hamburger, but mostly in the restaurant like a "healthier version" and not in McDonald's. But if that's not possible, I think it's fine there too, rather than not eating at all.

What do you consider your greatest achievement?

So there was quite a lot of success, the biggest was probably the one from Glasgow when I became European champion and then definitely from Belgrade when I first stood on the stage in big athletics and won a silver medal and then in the youth categories or the university competition.

What do you enjoy most about athletics?

I like athletics and it gives me the opportunity to stand out among others. The most beautiful is probably the races, when you have already done the hard work from training and preparation and made the most of it, or when you manage to run a good time with the placement, so that's probably the best. Of course, there is another side and these are the people who are happy when you are doing well.

Who or what inspires you in life.

I was inspired by a lot of people, if I was to name them, we'd probably be here til the evening, but my current role model, as it has evolved, is the 400-meter world record time athlete Wayde van Niekerk, I've had the opportunity to meet him at the World Championships in London in 2017. And he is a very nice person, from a personal point of view, we got along very well. And as far as life is concerned, family, friends, everyone who has a good idea, everyone who can contribute to my personal or professional life and live their full life.

What would you advise your younger self?

I used to not smile so much, I took everything as either black or white, and that's what life taught me and the people around me that it's not like that, that everything has more colors and can be seen from several angles. So I guess I would advise my younger self to take it easy.

What qualities do you look for in others?

In the moment I am looking for people with similar traits as myself, in terms of character or personality, the people who can enjoy me, who can work hard and are not afraid to lean into it and fight for the best possible result, whether in athletics or other areas and the people who give me energy and enjoy it all with me. When I'm not doing well, they're still with me and they won't judge me for it.

Do you have a philosophy of life that is important to you in life?

So I'm a Christian, I've been led to do it since I was a child, so it's probably part of my philosophy and what I do, I try to do so that I somehow use my talent, which I got, and return what was given to me and spread the joy to others but also to myself.

How do you see your future?

Precisely because sports life is short, a person can be injured, I decided to study too and that is why I study IT so that after an athletic active life I can fit somewhere and not have any existential problems. Of course, I want to stay in athletics.

It is difficult to make a living from sports if, for example, one does not play tennis. But I will try to stay in athletics for as long as possible.

Thanks for the interview. We at PPS hope that this dream will come true for Jan and we wish him a lot of success in his future work and personal life :)

Back to blog
See our games Work at Powerplay studio